Timeline of the initiative

Preparation of an experimental facility at the Rimov reservoir

The initiative started in November 2019.  At the end of this year, at the Rimov reservoir (Czech Republic), an experimental facility to control body orientation of experimental fish within an acoustic field of broadband echo sounders was constructed and tested on several fish. After tests, the experimental facility was removed due to the oncoming winter.

In April 2020, COVID-19 restrictions (especially travelling ones) came into effect, unfortunately affecting the agenda schedule of the initiative. Planned visits in abroad and a large part of fieldwork were postponed for one and half year. At that time, the goal was to conduct a part of experiments to obtain any data containing fish-body orientation information and to prepare tools to scrutinize the data. The initiative agenda was re-planned and reinitiated in September 2021.

Experiments with fish of known size and body orientation

In autumn and winter 2020, the collected raw acoustic data of fish in fixed positions were scrutinized, providing a large dataset containing information of signal’s intensity, phase angles and frequency responses (Figure 4). Some basic feature classification was performed on the frequency responses. Single-echo detections, however, indicated that observed side-lobes of fish targets (artificially created by the conventional-used compression technique for processing broadband data) could have potentially biased the resultant frequency responses of the fish. In addition, in January 2021, the original data conversion module in the Sonar5 software had to be recoded due to a technical issue occurring in the previous version of the software. For a few months, the Norwegian partner worked on fixing both the issues. The conversion process of the software was fixed and the Sonar5’s sample data analyser was advanced to remove or suppress the artificial side lobes of targets and to improve parameters for better single-echo detection.

In November 2021, the Norwegian partner visited the Czech partner at the Institute of Hydrobiology, Biology Centre of the Czech Academy of Sciences (Figure 5). During the visit, the new Sonar5’s tool for a quick data extraction from broadband signals was introduced, tested, and its modifications were discussed.

In January and February 2022, all broadband acoustic data from the 2020 experiments were processed, creating a huge dataset of broadband signal information on fish of different sizes and body orientations (24 variables and up to 600,000 observations). In March 2022, the Czech partner again visited the Department of Physics of the University of Oslo. During the visit, the datasets were subjected to a machine learning method called "random forest", which analyzed the extracted information together and separately. Unfortunately, the success rate of determining the angle of the fish's body using this method was around 60%.

In the following months, we focused on what other possible characteristics of the acoustic signal could be used to increase the identification of the correct inclination of the fish, as well as other techniques for processing highly variable data. The choice fell on the extraction of phase information from acoustic signals and on rather statistical methods, specifically in the field of generalized additive mixed models (GAMM).

During July 2022, the Norwegian partner visited the Institute of Hydrobiology, BC CAS. The main discussion was about how to extract the phase information from the Sonar5 program and how to proceed with the experimental part. During the visit, the Norwegian partner modified the program for the phase information extraction. After resampling the 2020 data during August, we obtained a more extensive dataset (31 variables with up to 2,300,000 observations). We subject the new data set to a series of minor analyzes to determine the influence of individual components on determining the inclination of the observed fish.

Continuation of the experiments

Another experimental part of the project was carried out in July and August 2022. Broadband acoustic data were collected from two additional large bream (for independent model validation) and three common roach. In addition, accompanying tests were performed (e.g., the effect of surface or depth on broadband acoustic signals from fish).

Data analyses and their output

We decided to focus on echo amplitude from the collected data, namely the raw information and their two descriptors (maximum AMAX and width AW at different levels below AMAX). First, we examined the interaction between fish tilt angle from the dorsal aspect and echo amplitude, expressed as acoustic target strength (TS in decibels, dB), at the pulse-compressed broadband acoustic signals. Second, we examined effects of echo amplitude descriptors, maximum and width, on the fish tilt angle at the pulse-compressed broadband acoustic signals.

The collected amplitude echo envelopes were modeled using the GAMM (Generalized Additive Mixed Model) approach, which was based on more than one million observations for fast- and slow-tapered acoustic signals. Shapes of the modeled amplitude echo envelopes gradually changed from the true dorsal to oblique tilt angles (Figure 6), representing more lower and less pointed/tailed curves (i.e., kurtosis of the curves was decreasing). This change was more pronounced for slow-tapered than fast-tapered acoustic pulses (Figure 6).

Generally, within the fish tilt angle, the effect of descriptors of echo amplitude was not straightforward and it differed between fast- and slow-tapered acoustic signals and between head- and tail-side dorsal orientations (Figure 7). The effect of AMAX was relatively low. The maximum of AMAX was shifted to tail-side positions, 5 and 10 degrees off the true dorsal aspect at fast- and slow-tapered signals, respectively. This indicates that the strongest reflection (largest incident area of swim bladder) did not come from the true dorsal position, but it came from the position when the fish was slightly tilted with its tail closer to the transducer.

Effects of AWs, in general, increased with a decreasing level below AMAX for both fast- and slow-tapered acoustic signals, suggesting that the highest levels would not be appropriate for determining the fish tilt angles (Figure 7). The global minimum was, however not in all cases, slightly shifted to the tail-side dorsal orientation, most noticeable at slow-tapered acoustic signals. Measure of the effect was dissimilar and grew at different rates towards oblique tilt angles between the head- and tail-side dorsal orientations. Higher rates in the effect size were on the tail side. Most stable and symmetrical shapes of the effect of AW between the head- and tail-side dorsal orientations were observed at 15 and 18 dB below AMAX, especially for fast-tapered acoustic signals, indicating that these two levels could be the best candidates to utilize them in determining the fish tilt angle. 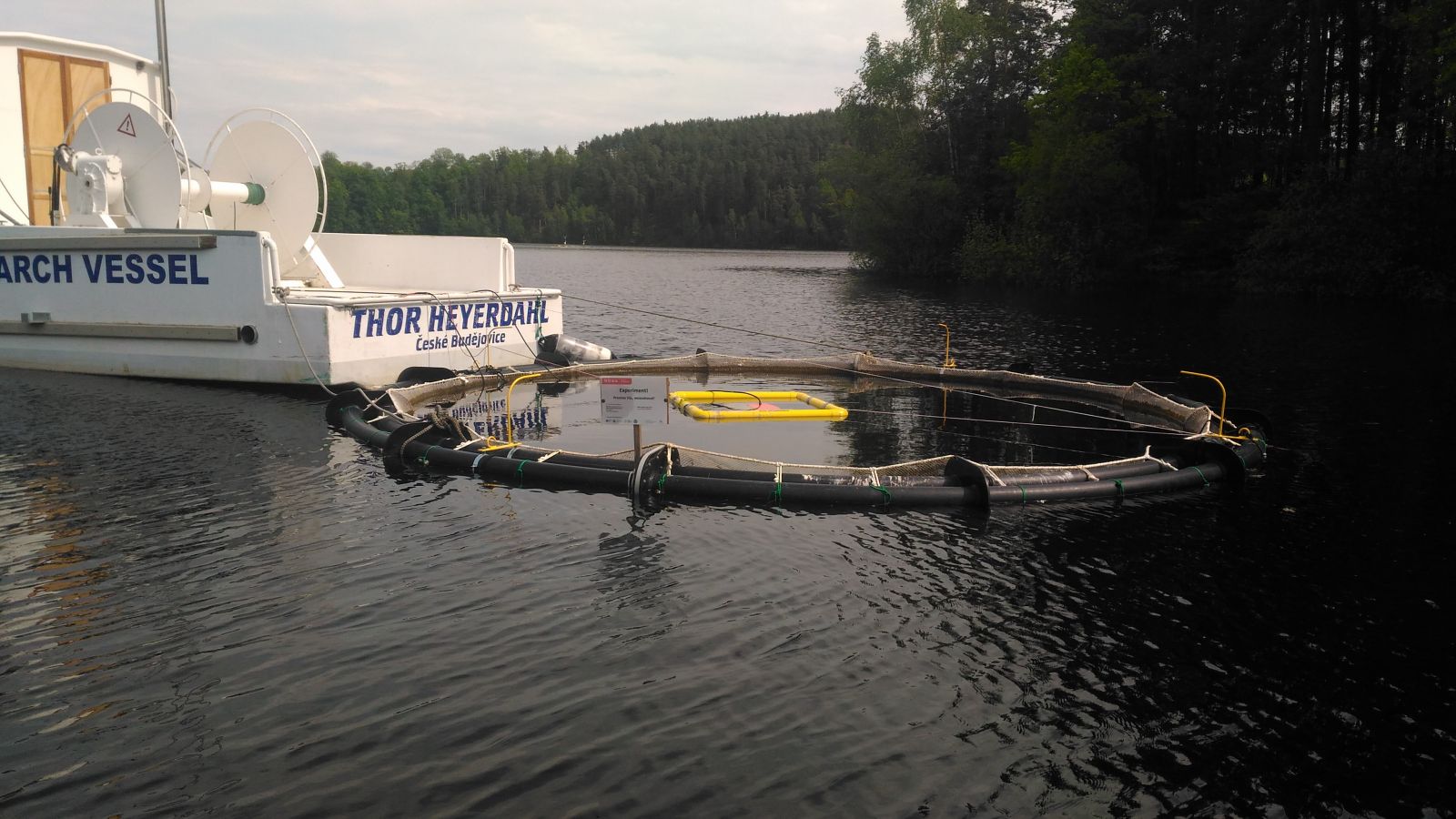 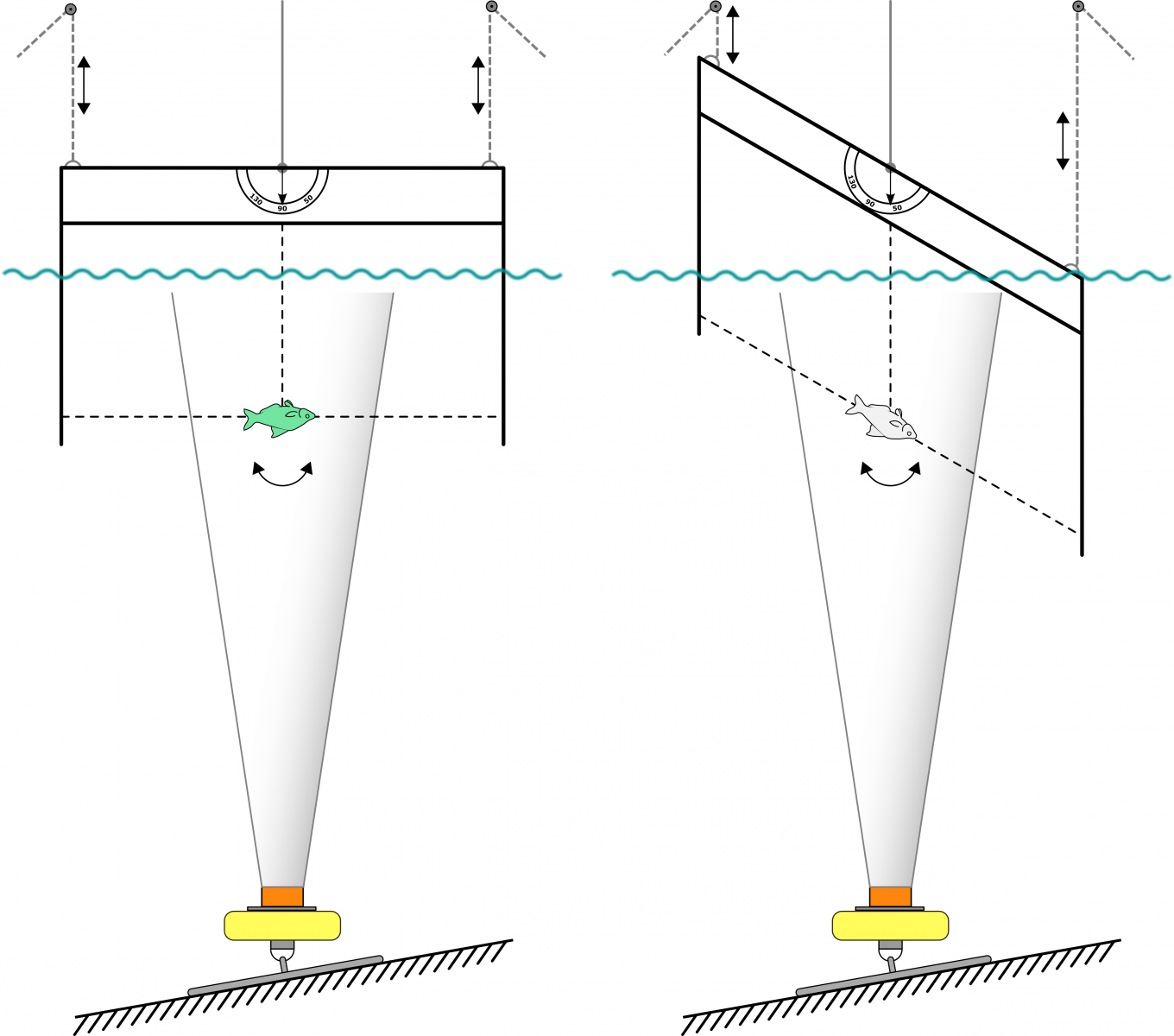 Figure 2. A construction scheme for adjusting the body angle of experimental fish in an acoustic broadband field. 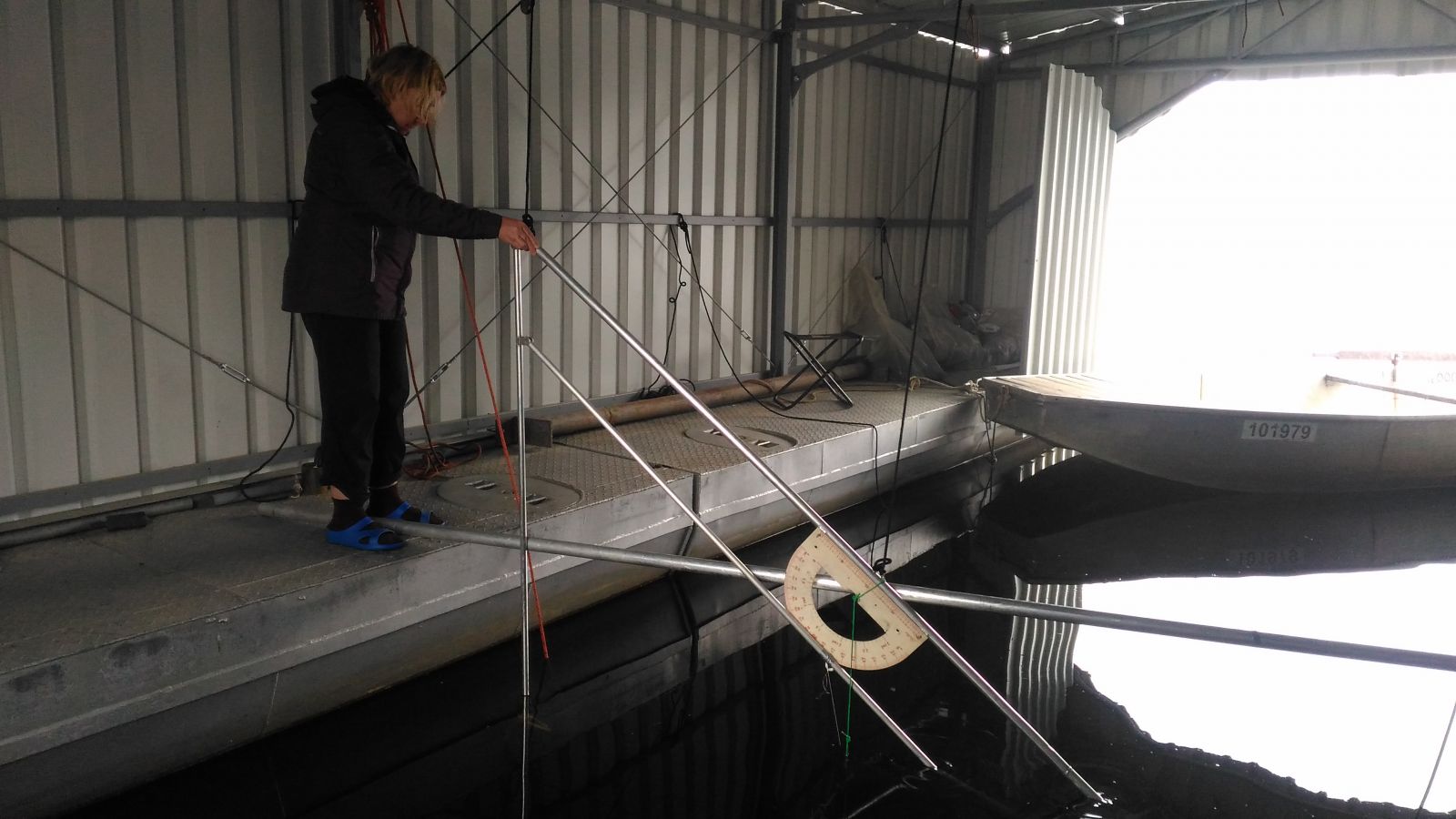 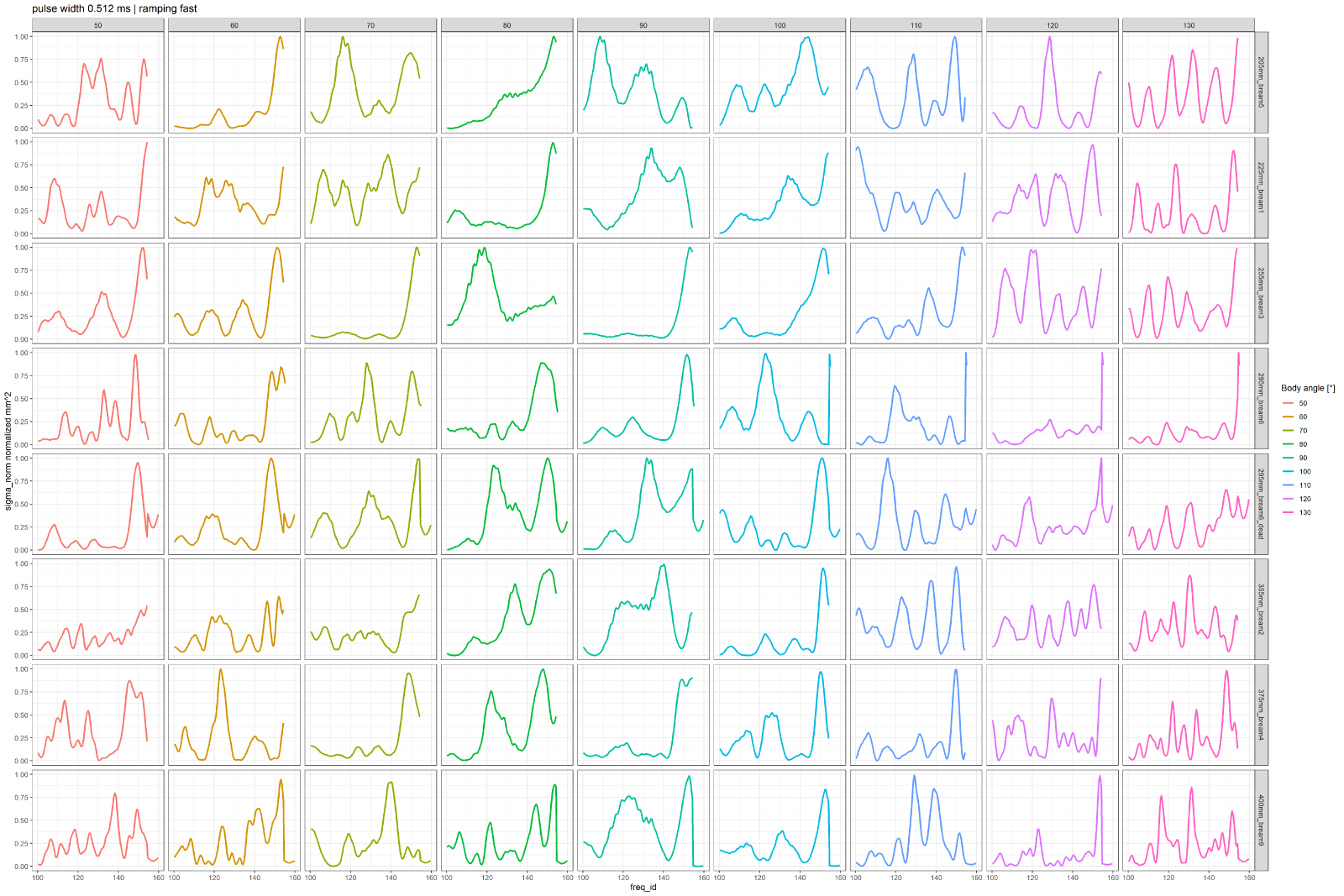 Figure 4. An example of the variability of frequency responses in breams of different sizes in a short, fast-ramping, acoustic pulse. 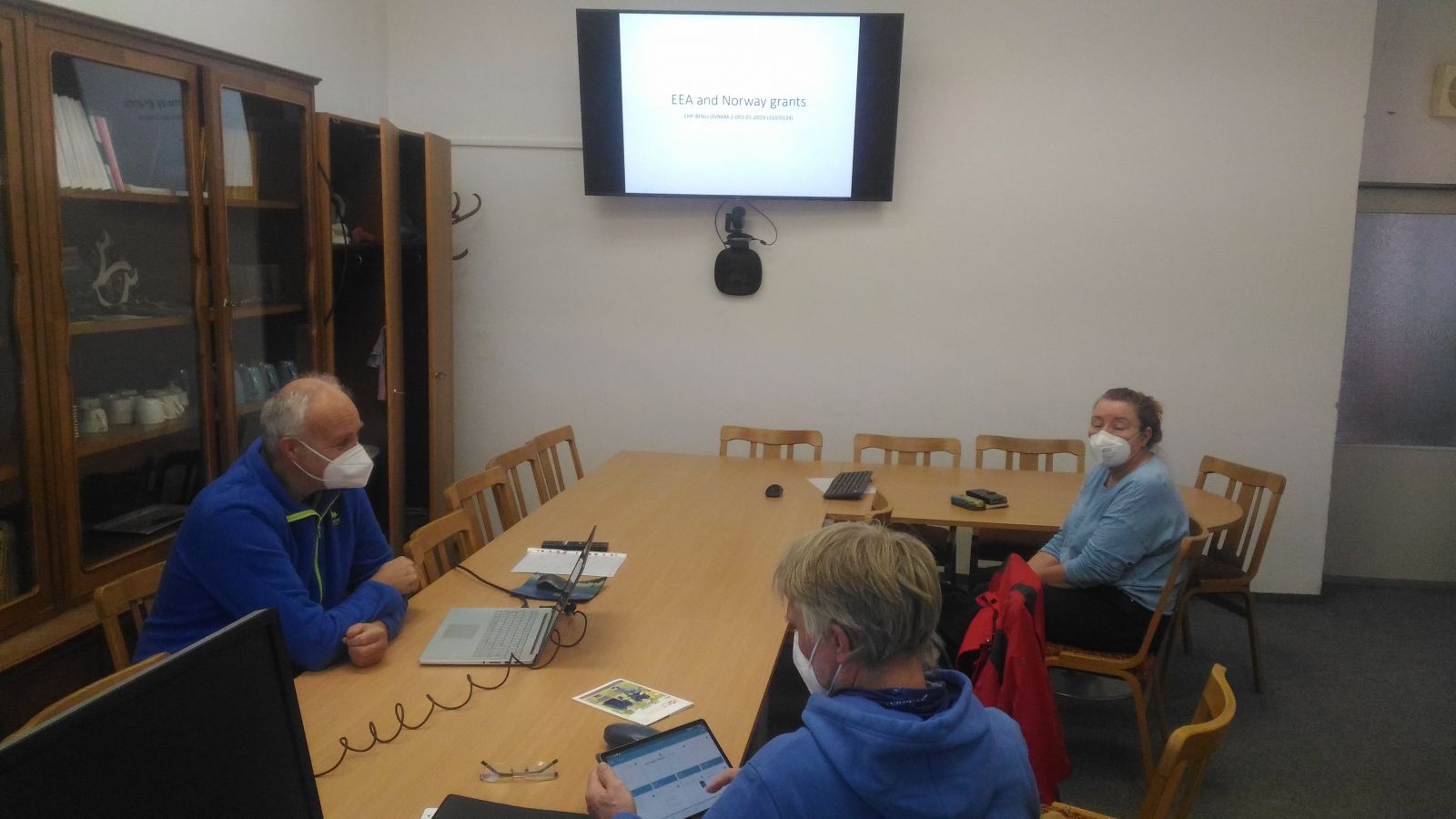 Figure 5. A meeting with the Norwegian partner at the Institute of Hydrobiology, BC CAS. 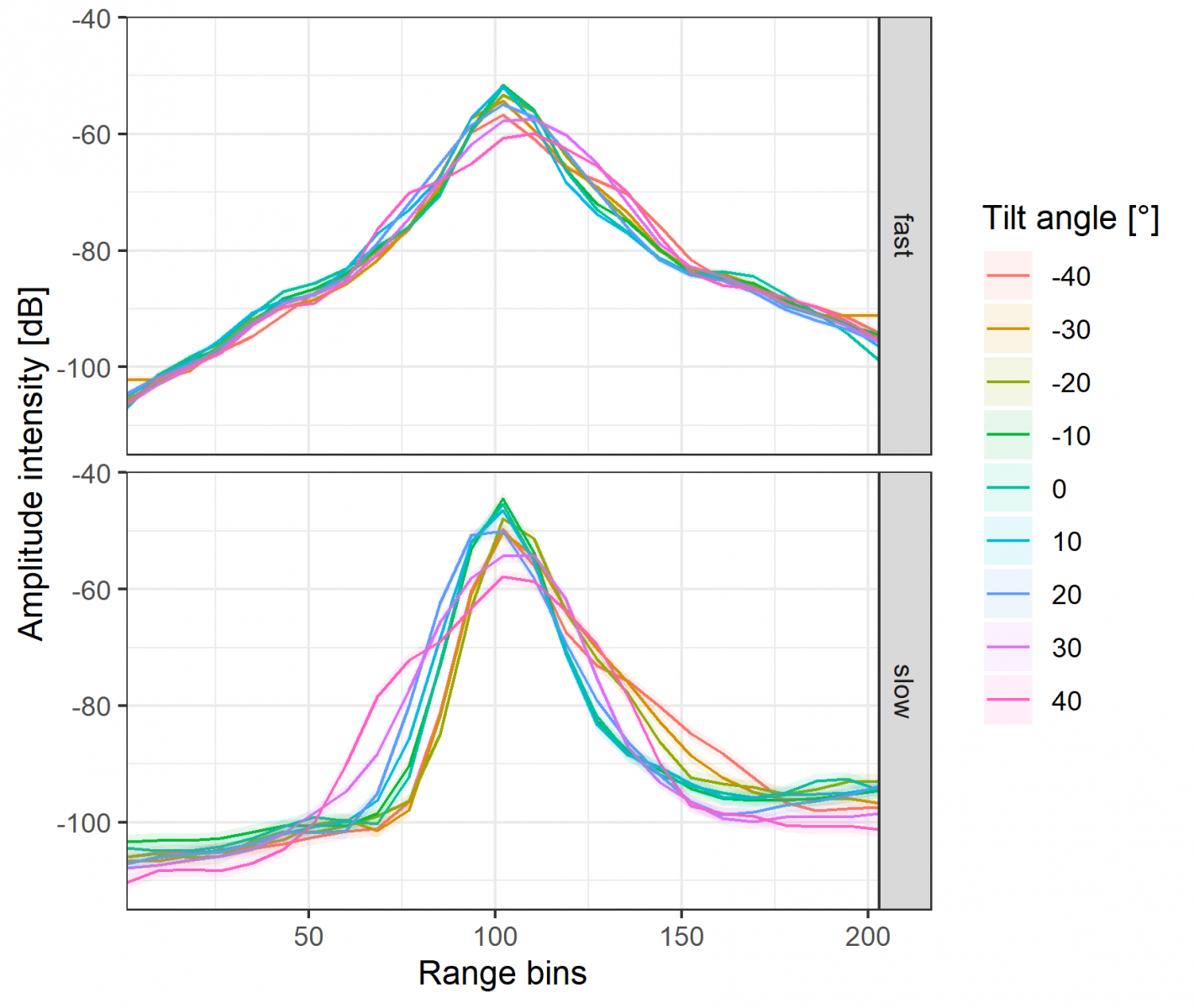 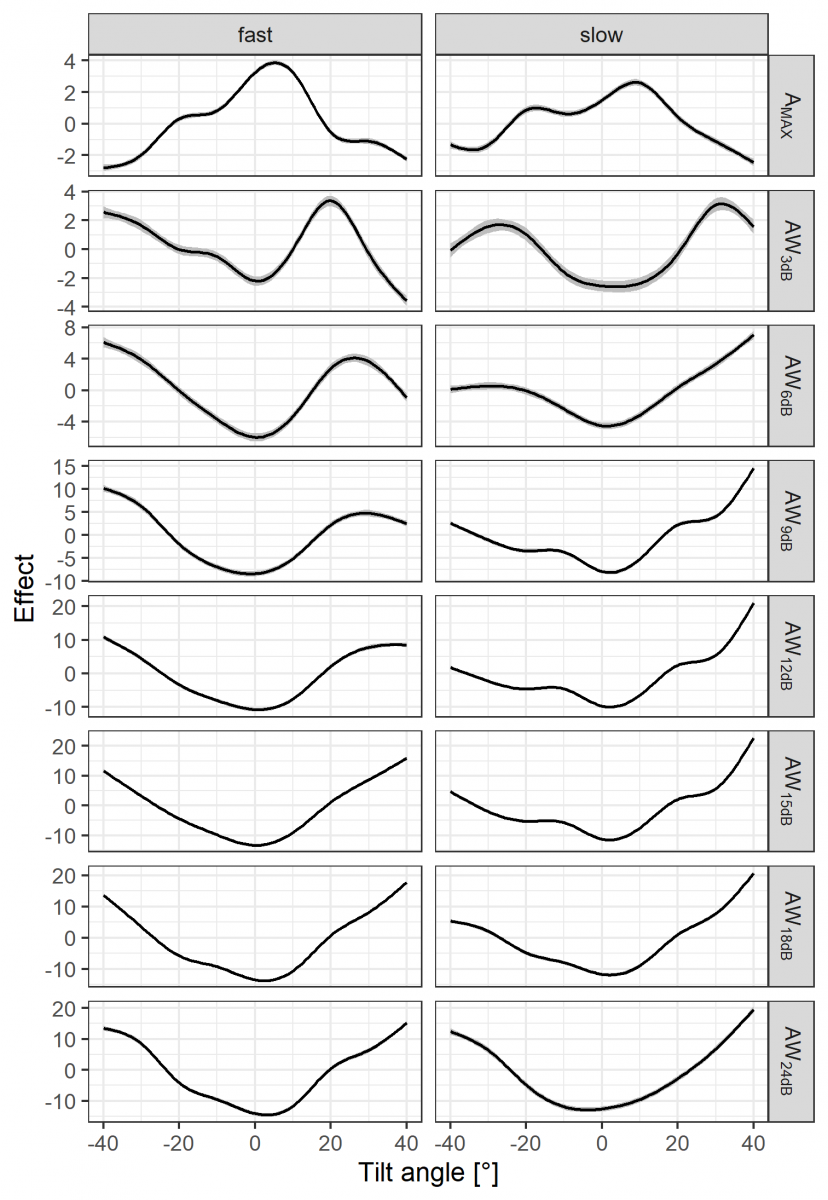 Fig 7. Effect of amplitude echo-envelope descriptors on the fish tilt angle (0° means the true dorsal aspect; negative angles means head tilted toward the transducer; positive angles means tail tilted toward the transducer) in fitted generalized additive mixed models (GAMM) for fast- and slow-tapered broadband acoustic pulses. A black line represents a smooth component (function of one variable), implemented as a thin-plate spline (Wood 2003), with a grey area representing a 95% confidence interval. AMAX stands for the amplitude echo-envelope maximum. AW stands for the amplitude echo-envelope width at several levels, expressed as a number of decibels below AMAX (dB; labeled as a subscript).