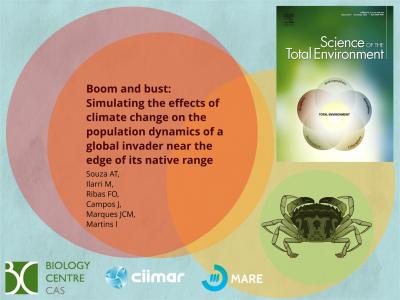 A new study led by Allan T. Souza, from the Institute of Hydrobiology (Biology Centre, CAS) and colleagues from Portugal, was recently published in Science of the Total Environment. The study has revealed the potential effects of climate change on the shore crab (Carcinus maenas) population near the edge of its native range.

The study used simulations to forecast the shore crab's population fate under different climatic scenarios, and the results showed that the shore crab population would experience a boom (fast increase in abundance) in the next few decades, followed by a bust (sharp decline in abundance) in mid-term, that will lead to a local extinction of the species near the edge of its southern distribution range. The main reason for the predicted local extinction of shore crabs in Iberian Peninsula is provoked by high water temperatures that would prevent crab larvae to survive, resulting in fewer young crabs reaching adulthood. This study highlights the importance of monitoring the effects of climate change on aquatic animal populations, in order to better comprehend the critical bottlenecks in the viability of vulnerable populations of aquatic animals.

Souza AT, Ilarri M, Ribas FO, Campos J, Marques JCM, Martins I. 2022. Boom and bust: Simulating the effects of climate change on the population dynamics of a global invader near the edge of its native range. Science of the Total Environment. doi: https://doi.org/10.1016/j.scitotenv.2022.158294.