Is it better to wait or move to get food? Unique experiment tracks pike behaviour in large lakes 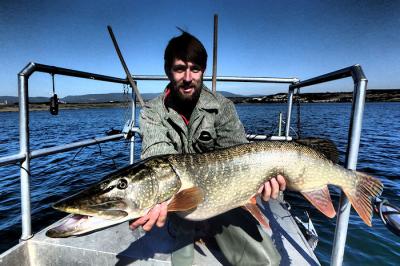 A new study carried out by scientists from the Institute of Hydrobiology of the BC CAS has focused on the question of how the behavior of aquatic predators will change when aquatic plants are present or absent in lakes.

A new study carried out by scientists from the Institute of Hydrobiology of the BC CAS has focused on the question of how the behavior of aquatic predators will change when aquatic plants are present or absent in lakes. The researchers selected Northern pike (Esox lucius) as the model species for the study. The species is known as an ambush predator, lurking for prey nearshore around plants and other structures. Even though pike is a widely distributed popular species, it was unclear how it would behave in a lake without its preferred feeding habitat. Whether pike will be able to switch to an active hunting mode or maintain a sit-and-wait strategy.

The research was conducted using the state-of-the-art method for precise tracking of fish movement (so-called position telemetry system) and the unique conditions of the North Bohemian flooded mine pits, lakes Milada and Most. The conditions in these lakes are very similar except for the presence of submerged aquatic plants. In Lake Most, submerged plants were virtually absent at the time of the research, whereas submerged macrophytes beds were well developed in Lake Milada.

The results showed that pike in Lake Most (without submerged plants) were more active, used more space (larger area and range of depths) and spent more time in open water than in Lake Milada. Even the growth of pike in Lake Most was higher. Probably due to the greater pike activity and the explored space, the probability of catching prey increased.

These findings clearly indicate that pike can adapt their behaviour according to the quality of the environment. Indeed, when pike were not able to lurk for prey in submerged plants, they used more active hunting and a wider range of habitats. As a result of that, they probably also found more prey. It is thus clear that the behaviour of this species is adaptive and can change according to local environmental conditions.

More information can be found in the study: