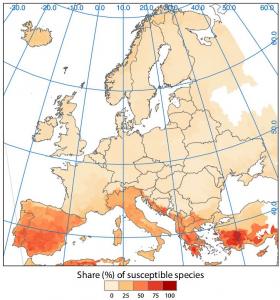 Climate change will strongly affect many European freshwater fish species. This is particularly the case for species in the Mediterranean region, according to the latest findings of an international team of researchers from institutions including the Biology Centre of the Czech Academy of Sciences, Leibniz-Institute of Freshwater Ecology and Inland Fisheries (IGB) in Germany, the University of Girona in Spain, the Norwegian Research Centre (NORCE), and the University of Belgrade in Serbia.

Many fish species are threatened globally by development and overfishing. Climate change is an emerging threat and it is understood that this will have negative impacts on many species. Freshwater fish species face particular challenges: dry inland waters, fluctuating water levels and, above all, rising water temperatures will affect numerous species in the future – fish stocks will decline, and more species of fish will become extinct. According to the Red List of the International Union for Conservation of Nature (IUCN), around one-third of freshwater fish species are vulnerable to the impacts of climate change. Consequently, freshwater fish are among the world’s most at-risk species.

A new study − published in Global Change Biology – by a team of researchers led by Ivan Jaric from the Biology Centre of the Czech Academy of Sciences, Institute of Hydrobiology, investigated which species traits influence sensitivity to climate change. “It will not be possible to avert the looming crisis in freshwaters by introducing a catch quota. Management initiatives and programmes to protect European fish stocks must take into account future changes in habitat conditions. In light of this, it is important to identify regions and species that will be most impacted by climate change,” stated Ivan Jaric, lead author of the study, explaining the team’s research approach.

Figure 1. Richness of freshwater fish species across Europe indicated as either susceptible (middle panel) or non-susceptible (left panel) to climate change, and the relative share of susceptible species in the local total species richness (right panel).

To this end, a total of 443 European freshwater fish species were analysed with regard to their susceptibility to future climate change. The team used these data to compile a list of particularly vulnerable fish species. According to their list, European species that occur in the Mediterranean region are particularly susceptible to climate change. Fish from extreme habitats that are characterised by heat and drought exhibit particular vulnerability under even more extreme environmental conditions. Most of the “top ten” vulnerable European freshwater fish species are from Greece, others are from Spain or Portugal.

What is more, most fish that are particularly vulnerable to climate change are characterised by a low commercial and fishing significance. “The species most susceptible often have a smaller body size, they are rare species with a small distribution area, and are therefore not necessarily of direct economic relevance. And yet they sometimes play an important role in food webs and ecosystems. I would like to see management measures focusing not only on fisheries, but also on conserving communities and the complex services they provide to nature and humans,” said Gregor Kalinkat, IGB researcher and co-author of the study.

The results of the study are a clear indication that measures for protecting European fish species vulnerable to climate change should concentrate in particular on the Mediterranean region.

Figure 5. The most relevant...