We knew where perch juveniles find their refuge 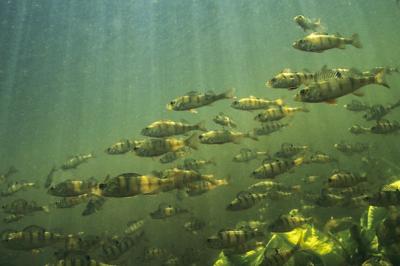 Perch (Perca fluviatilis, L.) plays an important role in the fish community of reservoirs and lakes in the temperate zone. If perch wants to be a key species, it must be numerous. That is why, it needs to have very high abundances of juveniles and the juveniles must survive the most critical part of their lives. The most important conditions of survival are i) avoidance of predator that can easily kill the vulnerable juveniles and ii) sufficient amount of food.

As we found out, both conditions can be realized in atypical habitats, such as hypoxic zone. Hypoxia (low oxygen concentrations) is lethal for most water organisms, especially for large fish, the potential predators. Hence, they try to avoid these zones. However, perch juveniles can survive low concentration of oxygen thanks to their small size. Juveniles use deep hypoxic waters as a refuge from predation with sufficient amount of zooplankton as a food source. Previous studies have shown that zooplankton may use hypoxic pelagic zones as a refuge from zooplanktivores. Nevertheless, we were the first who described this strategy of using hypoxic pelagic zone for small fish (Vejřík et al. 2016a).

Insufficient amount of food may be another obstacle for perch juveniles. Sometimes, juveniles themselves cause the lack of food source, as very high abundances of juveniles quickly eat up zooplankton. But it is a food source also for other zooplanktivores, such as bream. At the situation of zooplankton absence, we observed an atypical strategy of bream. It may start eating the perch juveniles, the primary reason of the lack of zooplankton. This desperate step done by bream closes the circle that keeps balance in the water ecosystems (Vejřík et al. 2016b).

You will find more information in the following publications: