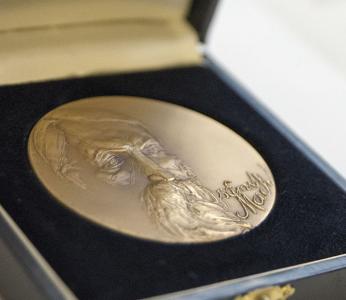 Professor Karel Šimek received Honorary Gregor Johann Mendel Medal for Merits in the biological sciences. The medal was awarded to him by the President of the Academy of Sciences prof. Jiri Drahos.

Professor Karel Šimek is one of the best known Czech aquatic scientist. He deals mainly with the relationships between bacteria and protozoan predators. His investigations, whether it is a laboratory culture models or natural aquatic ecosystems, are always deeply nested in the context of the broader context of Hydrobiology. Most modern molecular-biological methods are combined with classical methods of microbial ecology, in particular by fluorescence microscopy. With this worldwide highly valued approach Karel Šimek achieved outstanding publishing activity (according WOS more than 100 publications with IF) unusually high citation response (more than 3500 citations, h-index of 36 is one of the the highest among Czech environmentalists).

Since 1980 Karel Šimek works at the Academy of Sciences Hydrobiology labs, which has since been part of several different organizational departments (in the years 1991-2005 an independent institute), and since 1991 as head of the department. He works closely with a number of leading European institutes in the field. In addition, he initiated the South Bohemian University (1991), where he helped build the field of Hydrobiology and raised a number of successful followers. He also lectures microbial ecology of water at several other universities. He is a member of Professional councils of doctoral study Hydrobiology, respectively. Ecology at the University of South Bohemia and other universities.