Microbial drama in four acts: How small waterbodies defy the storms and help the landscapes to overcome consequences 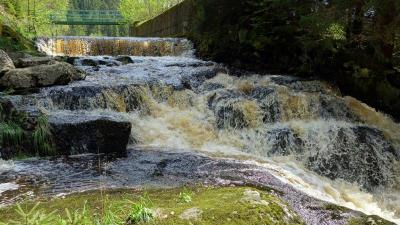 An international research team led by the Institute of Hydrobiology recorded and characterized the response of an entire pond plankton community to heavy rain events. This unique and very detailed survey showed that small waterbodies are able to defy storms and are amazingly resilient mainly thanks to microorganisms.

The researchers studied the nutrient fluxes and plankton communities in a small forest pond (Jiřická Pond, Novohradské Mountains, South Bohemia) and its main tributary stream before, during and after heavy rains in a high temporal resolution.

Response of the pond

The recovery of the pond after two heavy rain events was described for the first time as an adaptative cycle consisting of four clearly defined phases:

During the heavy rain or so-called phase of “collapse and release,” large amounts of organic matter were washed into the small waterbody along the large contact area with the surrounding land. Thus, the initial nutrient levels increased a hundredfold. Moreover, the rain increased in- and out-flows to the pond and exchanged the entire planktonic pond community with intruders carried in by water from the surroundings.

After the heavy rain, a “reorganization” phase started with the decrease of inflow, which favoured microbes previously observed only in the tributary stream.

In the next phase of “growth and exploitation”, copiotrophic, fast growing pond microbes reappeared in the pond community and outcompeted the intruders from the surroundings and stream. As the organisms dominating in this phase were very fast-growing, they contributed substantially to a normalization of elevated nutrient levels.

In the last observed “conservation” phase, the community returned to the initial stage and not only the microbial community but also the whole food web was re-established. 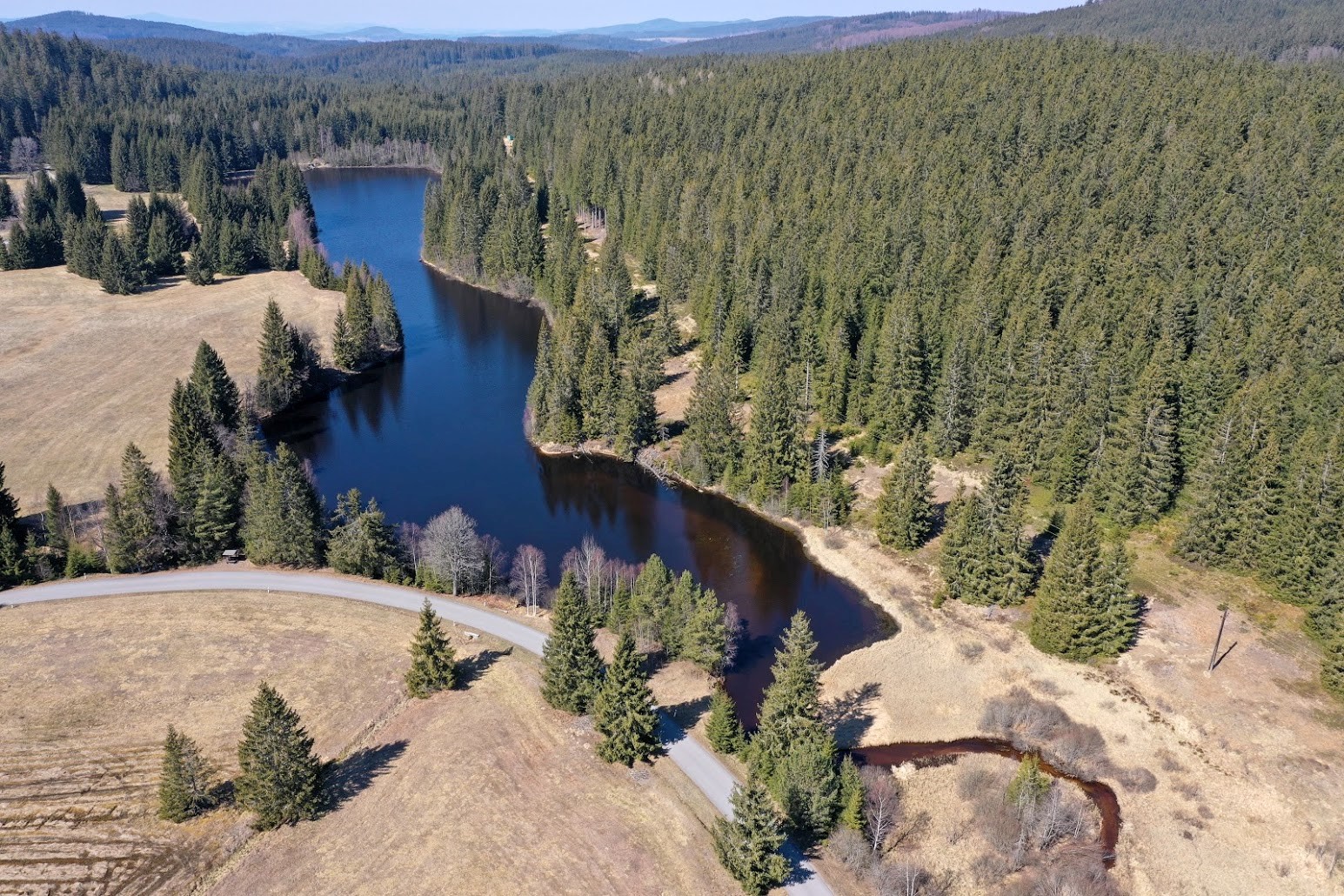 Rapid recovery is good for the nutrient balance of the landscape

Nutrient loads returned to their original levels particularly quickly – after only 9 days. This shows how efficiently aquatic microorganisms metabolised the nutrients. The original microbial communities with typical pond prokaryotes and eukaryotes were restored after 16 days; due to their longer generation times, larger phyto- and zooplankton needed somewhat longer.

In this study, the cycle was observed twice after two heavy rain events - a sign of the surprisingly high resilience and stability of the system. The open question is whether this resilience can be maintained even with increasing weather extremes caused by climate change. Therefore, it is important to follow different scenarios and the organisms' responses to them. This detailed study represents an important reference for such future threads.

You can read more about how the study was done here: 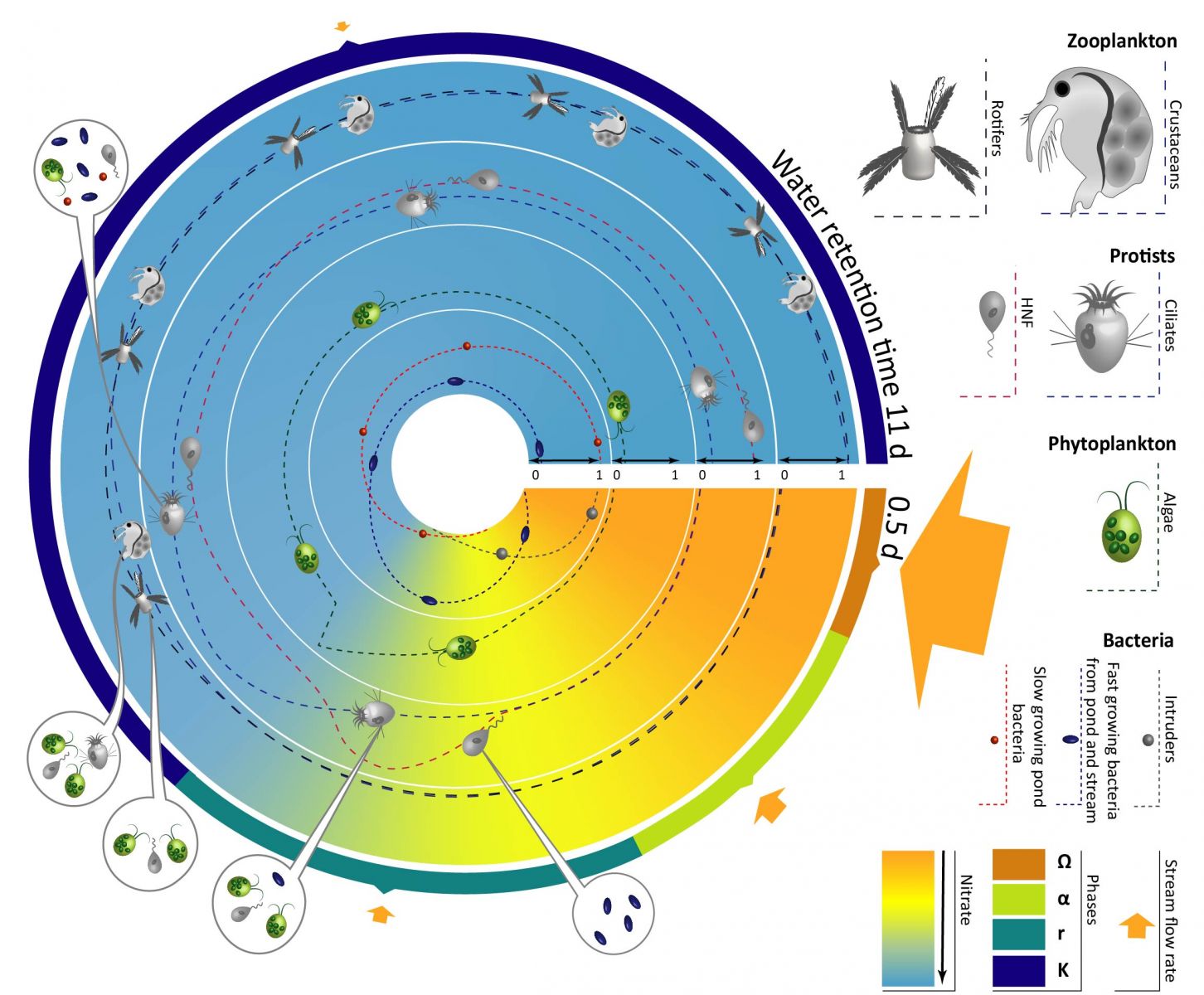 Figure legend: Food web structure of the Jiřická Pond plankton community during flood-caused cyclic succession, from Shabarova et al. 2021. Different phases are indicated in an external circle with colors: violet – ‘K’ conservation phase, orange – ‘Ω’ collapse and release phase, light green – ‘α’ reorganization phase, and aquamarine – ‘r’ exploitation phase. Relative abundances (where ‘1’ corresponds to maximum abundances) of different plankton groups are depicted in the four inner circles (from outside to inside): Zooplankton is represented by rotifers (dominated by Polyarthra sp.) and crustaceans (dominated by Eubosmina sp.). Protists are represented by heterotrophic nanoflagellates (HNF) and ciliates. Food preferences of zooplankton and protists at different phases are indicated by bubbles. Phytoplankton is represented by summarized dynamics of all algal species. Bacterioplankton is divided into three categories: intruders, fast growing bacteria from pond and stream, and slow growing pond bacteria. Nutrient gradient based on nitrate concentrations (0.00 to 0.14 mg N l-1) is displayed by different background colors, stream flow rates are indicated by different sized arrows.